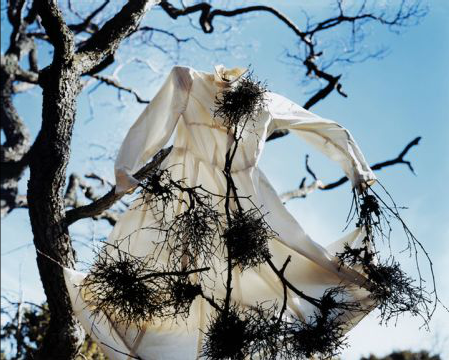 Isolated in a proverbial house in a forest, two young women, known only as Red and Black, have found themselves living out an obsessive, cyclical, ritualistic life. At some point, an outsider comes to the house, who they name White, and who they believe has some link with their unremembered past. The arrival of the outsider spurs them to attempt to build a completely new form of existence for themselves, removed from all learned cultural contexts.  This sparks a questioning of everything they had accepted as true and rightful, including their place in nature as the dominant species. It also triggers them to remember a past which had formerly been rendered unthinkable by the apparent wholeness of life in their little wooden house.

Our Little Wooden House in the Forest (previous working title: ‘In the dark, dark room’) is an ambitious cross-media experiment involving academic research methods in affiliation with the ICI; a performative installation; preparation for an experimental narrative film; and preparation for a resulting novel. Each of these works hinges on the exploration of the proverbial space of a cabin in a forest. The project, an intersection between art and scholarship, marks a significant amalgamation of Siouxzi’s key thematic and stylistic concerns since the beginning of her practice. It is at once a dynamic shift from her work created within the ICI Berlin’s core project on tension in addition to being in close alignment with the Institute’s current focus – ‘Wholes Which Are Not One’. The three characters within the project, Red, Black and White, are indeed representations of both parts and wholes of a conceptual narrative space: they exist, simultaneously as defined parts and as a collective whole within the cabin in the forest, resistant to traditional notions of binary oppositions. Their existences are at once reliant on each other for survival and the very thing that threatens each of their individual existences.

“We go out into the forest sometimes to chop wood, taking it in equal turns.These wood-chopping trips are the only time we ever leave our little house. When it’s my turn, I talk to the snow. I talk to it as it drifts and ask if it’s drifting into sleep or out of it. My feet disturb it, rustle it; the friction between my inside world and its outside world make heat that melts it and chills me. The sound is a kind of sex. The branches of the trees are letting the promiscuous snow rest there, rest there in their bare curves. The snow sleeps there, so open, collapsed into utter trust. One body giving the other comfort at the expense of its own. I keep the rhythm of my feet in the snow in time with the rhythm of my breathing. Any slower and I freeze, any faster and I tire out too soon, and then I freeze. The two must stay in synch. These times are the only times in winter that I am without the others. I am not alone here, because of the voices of the trees in the winter wind, and the strongest birds that have stayed on and not abandoned the forest. We are still here, together, I am not alone here. And the siren-swamp is still here, her scent and her colours dulled by the brilliant smothering of snow, but she is still here. I am not alone. And on the days when I can trust the sun will stay and not trick me into wandering in darkness, I detour from collecting wood and visit her, this siren-swamp.”